Gentrification: Won’t you be my neighbor?

03 May Gentrification: Won’t you be my neighbor?

Posted at 14:52h in Common Good, Race by Romanita Hairston

As a kid I grew up with a show called Mister Rogers’ Neighborhood. It began with a song,

The song carries on talking about the beauty of the neighborhood and Mister Rogers’ longing for a neighbor, “you” — whoever you are — to be exact. It ended with a simple question, “Won’t you be my neighbor?”

I live in such a neighborhood. My mom started a business in this neighborhood over 20 years ago when no one wanted to be there. She was, in fact, one of three anchor businesses before any popular stores were in the Columbia City area.

I had my own encounter with this reality one day as I was on the phone with the bank trying to report a vandalized or broken ATM machine. As I waited on the phone, a newcomer to the area, who I wouldn’t have ever seen on those streets just a few years earlier, wanted to assert his ownership of the area to me. “Miss, you don’t own this neighborhood.” Now, I could certainly understand his desire to get cash and his confusion as to why it was taking me so long. He missed my telling the people behind me what I was doing. However, his words were unmistakable, “own this neighborhood.” He was probably even more shocked at that reaction of the Hispanic gentleman and Caucasian woman behind me. Their look of horror at him followed by the Caucasian lady’s comment, “Sir, that is uncalled for. She’s reporting the vandalism of the ATM machine in the rear. This is our neighborhood!” She was thankfully quicker and kinder than I might have been were I not shocked by his comment and simultaneously amazed and grateful for her reply. After all, it was in fact my neighborhood. The difference is I didn’t see that ownership as exclusive, where some of us belong and other don’t belong. My family has been part of birthing the place these individuals now greatly enjoy. It is not better for me because they are here or worse. It was good enough then and it is good enough now.

In cities across the country, people are saying yes to the challenge of “neighboring” by moving back into the city! The cities once deserted by white flight are now being revitalized by people coming back to them to be closer to work, to be closer to the center of art/commerce/culture, to reduce their carbon footprint or commute time, and to enjoy a more urban and diverse experience among many reasons. This revitalization is also called gentrification. 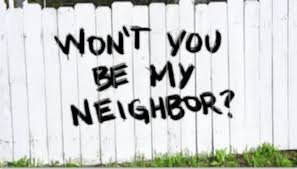 Gentrification is the process of renewal (revitalization) and rebuilding that typically is accompanied by the influx of middle-class or affluent people into deteriorating areas of a city that often displaces poorer residents. I believe God loves cities, and I see a tremendous opportunity in how we can approach neighborhoods in transition and become better neighbors. We can seek the welfare of our city (Jeremiah 29:4-7). I want to offer a few thoughts:

It is my hope that a new view on our neighborhoods will cause them to thrive and be an example to others as well as a support to others. We have to move from ‘my’ to ‘our’ and this means being willing to love our neighbors as ourselves.