The power of youth voice

26 Apr The power of youth voice

Posted at 14:59h in Youth, Youth Empowerment by Romanita Hairston 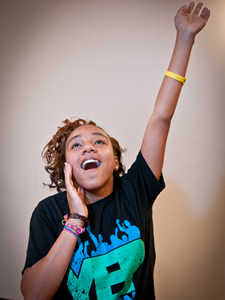 I had the honor in March of being a judge for a middle school oratory competition that was put on by a program run by one of my college classmates. It included students from several schools in the city. It has been a few years since I’ve been in a middle school or around middle school students. My middle child is in high school, and my youngest is in elementary school.

All of my memories of middle school were far too deeply hidden in my memory banks for me to conjure a personal expectation, and my older two children moved through this season fairly gracefully. So, I was left with a more socially shaped expectation of what the students and their speeches might be like that day. I was in for a wonderful surprise.

You don’t have to think about it long to recognize that middle school seems to be deemed the armpit experience of one’s educational journey. It is a time with more freedom, because students typically change classes and they have more teachers with whom to interact. It is also characterized by more social pressure and engagement that is self-directed as opposed to those parent-facilitated sleepovers and playdates from elementary school. The academic intensity increases as well. Every show I can remember or researched in writing this blog characterizes it as a time of immense pressure. A quick Google search led me to works like “awkward,” and the “longest five years of my life.” I found one quote that was highly liked, which said, “6th graders always anticipate joining Middle School, but near the middle of 7th grade, you’re screaming ‘GET ME OUT OF THIS PLACE!’” And “‘Drama is around every corner. Middle School sucks.’”

The students I had the privilege of listening to on that sunny March day were nothing like the socially constructed middle schoolers on television, and their experience wasn’t like anything I found listening to or researching the experiences of those around me.

The students’ diversity of experiences was intriguing, along with the powerful ways they shared stories of facing and overcoming things such as: fleeing war torn countries, resisting gang pressures, standing up against being bullied, losing parents to disease, finding their voice, mustering the courage to stand up for others, and believing in themselves in the face of racism and oppression. It was hard to take in the vast array of experience and the weight of the issues these young people were facing at such a young age. We.app, the organization that put on the oratory competition, did a brilliant job preparing them to share their stories.

I was particularly impressed by a young woman who shared on the equality of boys and girls. She talked about the goodness of living in a world that is accepting that girls can be strong, smart, and leaders. Then, she shared about the need for our world to accept that boys can be vulnerable, gentle, and caring. As she shared about the benefit of such a world to boys, she shared a vision for a world that prepares boys to be better people, parents, and partners. It was insightful, articulate, and compassionate. It was one of many powerful presentations worthy of the halls of congress and not just that electrified school cafeteria.

We often believe that children should be seen and not heard. However, this view of the world fails to recognize that many of our children, if not most, are growing up fast. They are facing adult issues long before they reach what many recognize as the age of maturity. When we see them and hear them, we create space for dialogue. We create space to understand their reality, and it is only from this place that we can labor together to create a better world with them.

If I had a magic wand, I’d love to wipe away the challenges young people face. However, my wand must be lost in the mail. What I have found, though, is that a listening and attentive ear can be better than a wand to move us toward the actions that are necessary to see real healing and change take place.